Beyond The New Yorker

Exploring longform, The New Journalism, creative nonfiction–whatever you want to call it

On Wright Thompson’s “Michael Jordan Has Not Left The Building” (ESPN The Magazine, February 2013) 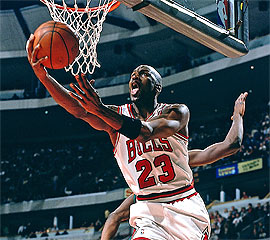 Synopsis: As Michael Jordan turns 50, Wright Thompson shows us a softer side of him and helps us understand his whole person. Stay posted for a Q&A with Thompson on the making of this story, coming soon.

There are always countless stories written about famous people and about major events. But after the buzz has died and countless stories published, one will always surface as the definitive, comprehensive, end-all-be-all, defining core story. It will be long, but it will be brilliant.

For Michael Jordan, this is that story.

We may have all worshipped Michael Jordan when he played for the Bulls and even pretended to be him on our driveway basketball courts, but there is, still today, a lot we don’t understand about Michael Jordan.

The three major facets of Jordan’s character that Thompson delves into—those we have yet to grasp—are his nostalgia, which we’ve never seen from him before; his relentless competitive nature, which we are familiar with but have mistaken for arrogant conceit; and his denial of age, which transcends that of most other iconic athletes.

But in the opening section, Thompson shows us that, at 50, Jordan is beginning to loosen the slack on that denial and grapple with his own mortality. “I…I always thought I would die young,” Jordan, owner of the struggling Bobcats franchise, tells Thompson in his office.

He has kept this fact a secret from most people. A fatalist obsession didn’t go with his public image and, well, it’s sort of strange. … He just could never imagine being old. He seemed too powerful, too young, and death was more likely than a slow decline. The universe might take him, but it would not permit him to suffer the graceless loss and failure of aging. A tragic flaw could undo him but never anything as common as bad knees or failing eyesight.

This is a story about Jordan coming to terms with this reality, while having to deal with the competitive urges of his younger years.

After Thompson establishes this, it sets the stage for the next section, a long scene in which we see a sentimental Michael Jordan, looking back on different eras of his life on the floor of a large walk-in closet, opening a safe that contained artifacts of yesteryear: the tarnished 1984 Olympic gold medal, an old pair of shorts, first-edition Air Jordans, letters to his parents from college that ended “Please send stamps,” old home videos and old baseball cleats.

But what trumps all of these material memories and what is at the root of Jordan’s core is his relationship with his dad, James, who was murdered 20 years ago. When Jordan is thinking about his dad, we see him in his most vulnerable state—just as rare as his nostalgia. A major strength in this piece is how Thompson shows us all of this through description of real-time conversations and Jordan’s expressions and mannerisms:

“Where do you most feel your dad’s presence?” he’s asked.

Five seconds pass, then 10. Silence. He leans back into his chair, limp, his paunch noticeable for the first time. The sky outside is gray. He scrunches his mouth, rubs his neck. Suddenly he looks older, his eyes glassy, and even 20 years after his father was murdered — robbed of a Lexus and two championship rings given to him by his son — it’s clear that Jordan still needs his dad.

But of course, Thompson can’t ignore the image that has generally accompanied Jordan throughout most of his career: conceited, selfish, a win-at-all costs kind of guy. Because of his greatness we love MJ no matter what, but acknowledge these things, too, as Thompson must do. Thompson describes him as being a “breathtaking asshole.

Most people associate this side of him with his 2009 Hall of Fame induction speech, in which he places himself on a pedestal and lists anyone who’s ever doubted him. (In fact, Thomas Lake wrote a gem on Jordan’s currently schizophrenic high school basketball coach, whom Jordan put down in the speech.) But in this section, Thompson explains how, while we expect retired athletes to deliver a spell of nostalgia in their Hall of Fame speeches, we were let down when Jordan did not—because Jordan wasn’t ready to.

He wasn’t nostalgic that night. The anger that drove his career hadn’t gone away, and he didn’t know what to do with it. So at the end of the speech, he said perhaps the most telling and important thing in it, which has been mostly forgotten.

And that thing is that he wishes he could still be the young Michael Jordan and could still play basketball, 218 pounds and bones 25 years younger. This fleeting possibility consumes Jordan—though he knows, really, it’s not much of a possibility. Thompson reminds us in this section of the physical limitations of age that are like disease to Jordan, which he began with in the opening section.

The scene Thompson closes with is, what would seem, an ordinary night of Jordan yelling at the refs on the TV screen showing his Bobcats, spending several hours switching the channels between games—yet Thompson still shows how this is representative of everything Jordan is. It’s in the little things, like a SportsCenter poll comparing young Tom Brady to old Joe Montana: “Aging means losing things, and not just eyesight and flexibility. It means watching the accomplishments of your youth be diminished, maybe in your own eyes through perspective, maybe in the eyes of others through cultural amnesia.”

After too much basketball and everyone has gone to bed, Thompson leaves us with Jordan alone, trying to fall asleep, to end the story. If you were wondering about the Western illustration that is host to the title of this story, you will find that brilliant explanation here.